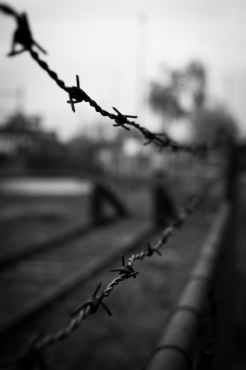 Photo by Skitterphoto on Pexels.com

I grew up in a neighborhood with lots of diversity. My folks did not discriminate, so neither did my sister and I. People were people. Some were nice and some not-so-nice. One of the most interesting was Mr. Johnson. He was blind and he was older—like a Grandpa.

One of my friends…actually not a friend as I was to learn…who lived nearby, was a prankster. He never tired of pulling pranks on everyone and we were getting frustrated with him. Finally, he did something to Mr. Johnson that excluded him from my circle of friends.

Mr. Johnson lived alone with his dog, Pete. He used a cane to get around his yard and all over town. He had a garden out back and tended it often. He raised lots of vegetables that he shared with everyone. If you wanted to pick some veggies on your own, you just rang a bell Mr. Johnson had attached to his gate. That way he knew someone was in the yard and he would come out to visit and chat.

As you may imagine, Mr. Johnson had established walking paths around his yard to get around to everything. Often he would putter around without using his cane to detect any stumbling blocks. This is where Freddy the prankster came in.

Freddy decided it would be funny to ring the bell after he had set up obstacles in Mr. Johnson’s pathway. So he did. After he placed a few blocks in the paths, he rang the bell and hid off to the side. Mr. Johnson came out smiling, bidding a welcome to whoever may need some vegetables. He hadn’t gone very far before his foot hit a wooden block in the middle of the path. Down he went, cracking his wrist bone and bumping his head on a border stone.

Fortunately, Mr. Johnson’s next-door-neighbor came to get some cucumbers right after this happened. She was a nurse and was able to tend to his bruises and swollen forehead. It turned out that his cracked wrist just needed a tight wrap for a week, along with some pain medicine. This prank did not change Mr. Johnson’s attitude or generosity. Friends removed Freddy’s obstacles and everything went back to normal in Mr. Johnson’s backyard.

Freddy was never seen in the neighborhood again. By Fall, he and his family had moved to another school district.

I wonder if I am ever a stumbling block to others by my actions, attitudes or conversation? Without considering the impact of what I am doing or saying, do I cause others to stumble or fall? What about those times when I just have to have my way; who stumbled on my selfishness? Someone surely. Thank you Lord for your forgiveness.

In 2 Corinthians chapter six, the Apostle Paul declares in great detail what he and Timothy have endured so as not to cause others to stumble: “We have been beaten, been put in prison, faced angry mobs, worked to exhaustion, endured sleepless nights, and gone without food. We prove ourselves by our purity, our understanding, our patience, our kindness, by the Holy Spirit within us, and by our sincere love— Our hearts ache, but we always have joy. We are poor, but we give spiritual riches to others. We own nothing, and yet we have everything.” (2 Corinthians 6:5-6, 10)

Once we taste the fruit of God’s Holy Spirit in our lives, we are transformed. We have the power, wisdom and discernment impossible before our salvation. The Holy Spirit is always at work within us, communicating God’s plans each day. Are we diligently on the broad path to materialistic success and selfishness or on the narrow path, willing to suffer whatever pleases God to refine us into the Christlike person He is creating? If I love the Lord how can I be a stumbling block to others?

1 Corinthians 8:9  But you must be careful so that your freedom does not cause others with a weaker conscience to stumble.

2 Corinthians 6.3 We live in such a way that no one will stumble because of us.

Romans 14:13  Therefore let us stop passing judgment on one another. Instead, make up your mind not to put any stumbling block or obstacle in the way of a brother or sister.

Praying Gods Word in all areas of life... The Good, The Bad, & The Ugly

The heavens are telling the glory of God; and the firmament proclaims His handiwork. Psalms 19:1

The One Thing I know For Sure

A soft place to fall, some poetry, some stories some random thoughts but most of all a place that I hope blesses those who stop by.

The End of the Sidewalk

Where "What's Next?" Begins with Christ

BY GRACE THROUGH FAITH

Looking at the Bible from a new angel.